The average American woman today has far more periods than she would have had centuries ago. Not only do modern girls get their first period at a younger age, we also tend to have fewer children. In earlier times, women spent most of their fertile years pregnant, which puts menstruation on hold. As the experience with our period has changed, so have the products we use to manage it. Today we can turn to period panties or cups. We can have safe, organic tampons delivered to our doorsteps. We may have more periods, but we have more options, too. And a look back at period products through history will make you grateful for these innovations.

Most women in history would not recognize the pads and tampons we use, which became mainstream in 1960s and 70s. Even so, the concept of absorbing menstrual blood either outside or inside the body is nothing new. Women in Egypt used papyrus as tampons, according to Flow: The Cultural Story of Menstruation. In the book, authors Elissa Stein and Susan Kim also recount how women wrapped lint around wood to create tampons in ancient Greece and Rome. In ancient Japan, women turned to paper to absorb blood, while the Native Americans made pads out of moss and buffalo skin. These were the first “all natural” products.

THE 1800S: THE FIRST DISPOSABLE NAPKIN

Until the 1880s, American and European women continued the DIY approach to period care. On its website, the Museum of Menstruation says that these women either made their own menstrual pads, bought washable pads, or opted to have their clothes absorb the blood. Remember: women had far fewer periods. Menstrual blood was more of a novelty than a regular occurrence every month from about age 13 to 51, according to Sharra Vostral, an associate professor of history at Purdue University and author of Under Wraps: A History of Menstrual Hygiene Technology. “If you’re pregnant multiple times, you’re not having your period, and if you’re lactating multiple times you’re not having your period. If you have five or six kids, that’s 10 years of your menstrual life,” she told me. That’s a lot fewer periods, so dealing with blood on your clothes didn’t happen that often. 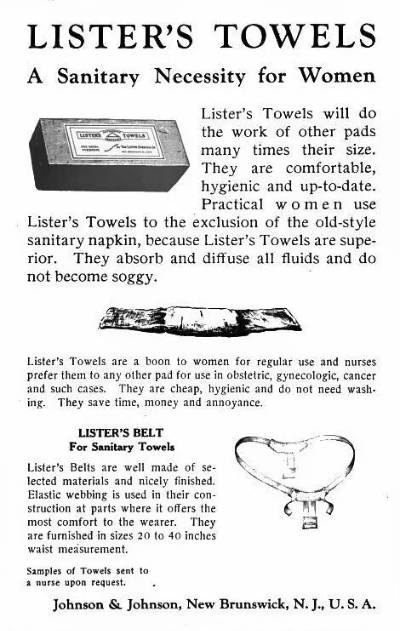 Still, it’s annoying to deal with bloody garments, and by the late 1800s, corporations saw a business opportunity. In 1896, Lister’s Towels became the first disposable sanitary napkin for sale. Originally, these sanitary napkins were part of a maternity kit given to women. While they could be used to absorb postpartum blood, women realized the pads could also be used for menstruation and encouraged the company to sell them separately. Disposability represented a major breakthrough. Imagine trying to deal with bloody cloth while you’re out and about. Now, women could simply toss the napkin when it was full. During this time, companies also tested sanitary aprons and sanitary bloomers. The early period panties worked like the rubber diaper covers used for cloth baby diapers.

In the early 20th Century, women drove innovation around period care products, and the bloodiness of World War I had an unintended consequence. During the war, nurses in France noticed that the cellulose they used for bandages absorbed blood much better than cotton. They began using it for their menstrual blood. Kotex caught on and acquired leftover cellulose from the war to introduce a new, highly-absorbent disposable sanitary napkin. Just like Lister’s Towels, these napkins were disposable but not self-adhesive. That meant you had to attach the pad to a sanitary belt with hooks or safety pins.

To help women get over the perceived embarrassment of shopping for commercial feminine hygiene products, Kotex encouraged shop owners to leave the products on the counter along with a box where women could drop in money. That allowed them to avoid interacting with a shop clerk. By 1927, Modess came on the market as a competitor to Kotex and the industry started to pick up. “Although sanitary napkins weren’t a new idea,” Vostral explained, “having them manufactured and disposable was the innovation in the teens and ’20s.”

Being able to throw away a product also freed up a huge amount of time and labor for women, who no longer had to wash their bloody rags and clothes by hand. Vostral told me: “It’s not like there are electric washing machines in the 1915s to do that work. People are still ringing out their clothes. The disposability factor is a big thing.” It’s also expensive. “In my research, I came across a woman who even in the 1930s said her family had a meeting about whether to buy bread or Kotex. They chose Kotex,” Vostral said. “I don’t think it can be overstated, what it meant to have that freedom to not lug dirty laundry around or be able to be able to put a sanitary napkin in a bag or pocket.”

More advancements were made in the 1930s, but it would take a while for the general public to catch up. During that decade, Leona Chalmers, a woman inventor, patented the menstrual cup. And in 1929, Dr. Earle Haas created the tampon. Kotex passed on the patent, but businesswoman Gertrude Tenderich acquired it and formed the company Tampax in 1936.

“Tampons provided a different kind of bodily freedom, because you’re not literally yoked with elastic waistbands and pull tabs and this thing that wraps around your hips and between your thighs,” Vostral explained. Tampons allowed a woman do all kinds of physical activity, and the early adopters were dancers and swimmers. “As clothing became more streamlined you can see the ‘tell-tale outlines’ of sanitary napkins, as they were called in the ads,” Vostral told me. “Tampons are a big deal because you don’t feel it and you’re not limited in the same way.” We’d still have to wait a few decades for commercials of women running on the beach in white pants.

While tampons were available from the 1930s, many women still used the sanitary belts during this ‘50s. These pads were considered more appropriate for unmarried women. “You didn’t want a tampon to break a girl’s hymen when virginity was valued above so many other things,” Vostral explained. “There was a sense that a tampon could sully a girl before she’s even had heterosexual intercourse” she added. During this decade, however, there were some innovations around tampons. For example, the brand Pursettes released a “pre-lubed” tampon. They were theoretically easier to insert, making them better for inexperienced women. 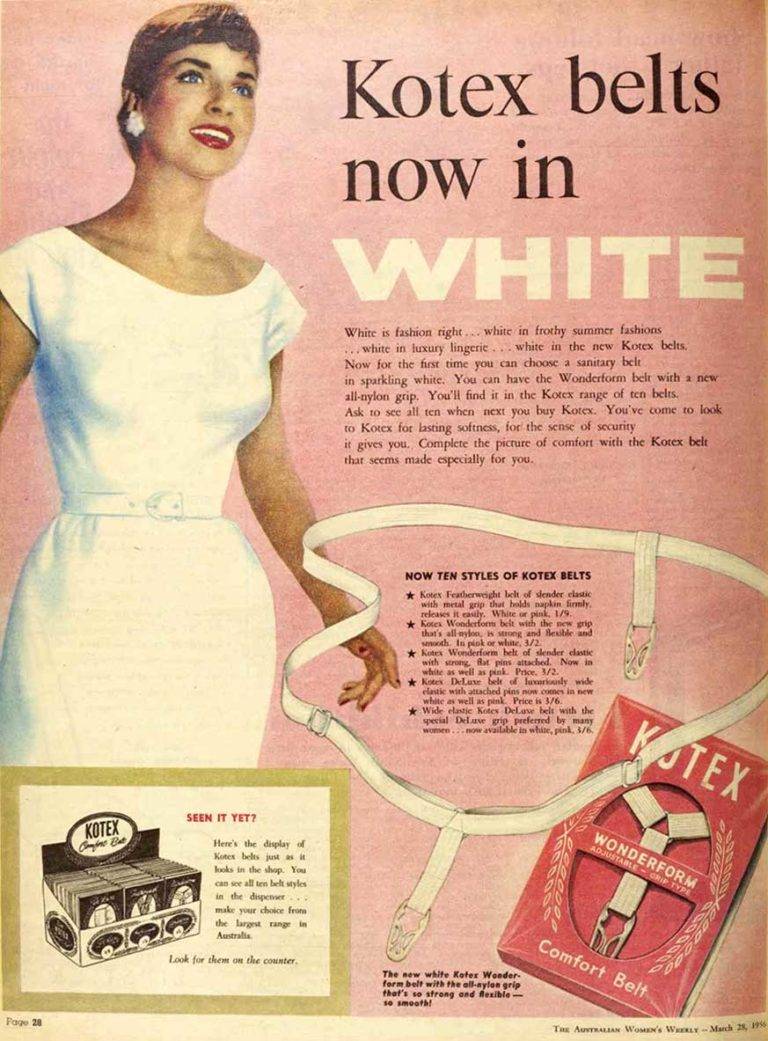 Before self-adhesive pads, a woman would attach a pad to belt she wore underneath her clothes. 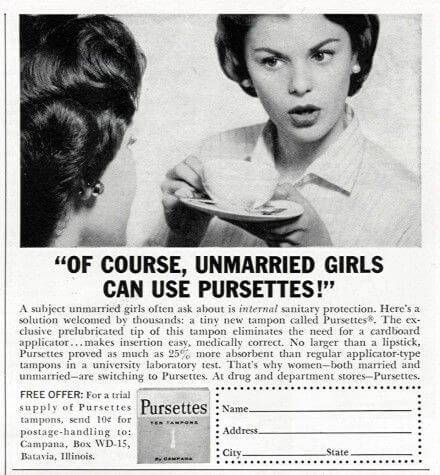 No more belts! In 1969, Stayfree created the first maxi pad with an adhesive strip. Now you just needed the pad itself, and not a complicated contraption to keep it secured. Tampons also became popular. “By 1980, about 70 percent of women are using tampons,” Vostral said. While it took time for tampon companies to advertise to first menstruators, word began to spread among women. 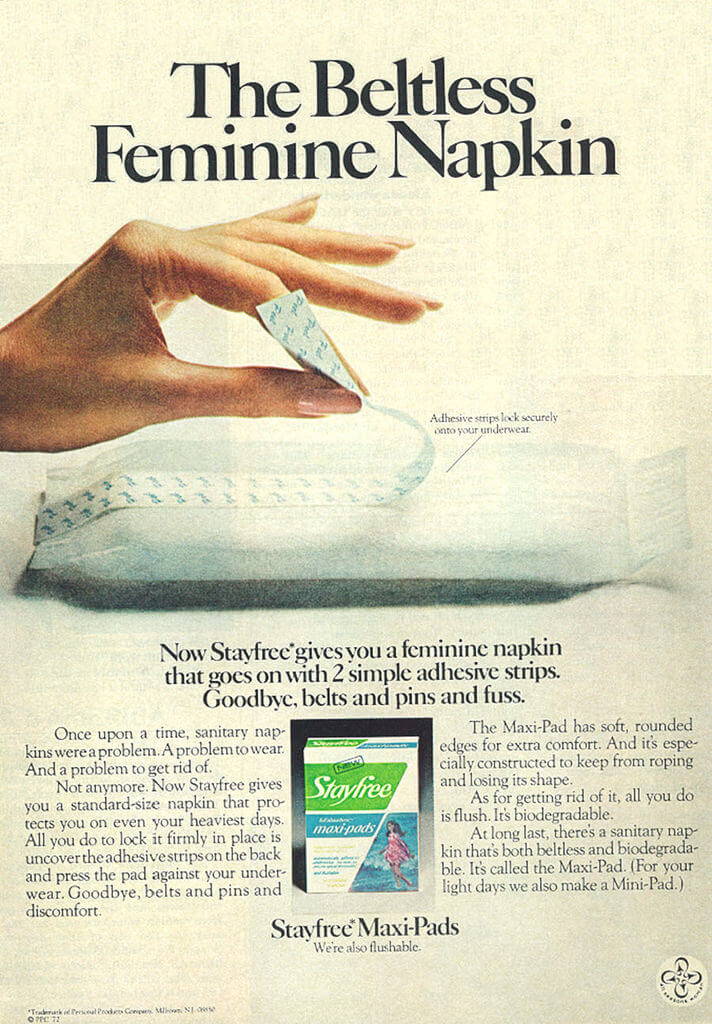 Once tampons became the prefered way to deal with menstrual blood, companies got a little too creative with their iterations. Playtex made a deodorant tampon that promised to capture odor inside of you, which doesn’t make sense since internal blood is odorless. In 1980, Rely released a super-absorbent tampon made of polyester. These synthetic tampons were linked to Toxic Shock Syndrome and recalled.

As women embraced tampons in general, the greater culture still wanted to pretend women didn’t bleed. It took until 1985 for someone to say the word “period” on TV, when Courtney Cox said it in a Tampax commercial. Euphemisms and blue liquid still continue in traditional period advertising today, but modern brands also embrace a no-shame approach to promoting their products. We have Courteney Cox to thank for starting that trend.

Courtney Cox said the word “period” for the first time on TV in 1985.

In the new millennium, women began to skip their periods all together. In 2003, the FDA approved Seasonale, a birth control pill that allowed women to bypass monthly menstruation. Today, the popularity of the IUD also means some of us no longer get a period, a common side effect of the contraception. When they do get a period, women can use super-absorbent period underwear or menstrual cups, in addition to tampons and pads.

Women entrepreneurs today see an opportunity to bring period products in line with the needs of the modern woman. In 2016, Cora launched its subscription service for organic tampons. Cora’s tampons come in sleek black packaging. They’re an alternative to drugstore tampons filled with toxic or unreported ingredients and packaged in noisy wrappers. For every month of Cora tampons you buy, Cora provides one month’s worth of pads and reproductive education to women and girls in need in India and Kenya, helping women all over the world have access to the period technology many of us in America take for granted.

Thanks to innovation, more women can manage menstruation safely and with dignity. It makes you wonder why it took so long.

Your browser is out of date, and may not be compatible with our website.

You can update your browser from the link below.